For most of my life, people have told me I look a lot like my mother. It’s true. My brother and I both resemble Mom so much there was no question who our mother was. My sister always resembled Dad more. We always had some good laughs about that growing up as we tried to figure out exactly how it happened that boys looked more like Mom and the daughter looked more like Dad.

For so many years, I always said I wished I looked more like Dad. Some thought that meant I wasn’t happy with the way I looked or I didn’t appreciate what Mom had done for me. That wasn’t the case at all. Part of it had to do with the fact I was only 8 when Dad died, so it was that idea of being able to look in the mirror and see him every day. The other part was this idea that if I looked more like Dad, maybe I wouldn’t struggle with my gender identity. Maybe I would be happy as a man if I looked more like him. I know it may sound silly, but when you’re struggling so much…you look for anything to explain away the pain and suffering you go through on a daily basis.

Now let me say, Mom was a beautiful woman. I don’t have a lot of pictures of her from when she was younger, but the ones I do have…she was gorgeous. In high school, she was a cheerleader and homecoming queen. In college, she was president of her sorority and the queen of whatever festival they had (her college was all women and so there was no homecoming). As much as I denied it to the world around me, I would have given anything to look like her.

Over time, as I tried to “accept” the fact I would never be seen as a woman in life, I started to enjoy the fact I looked more like Mom. It didn’t resolve my gender dysphoria, obviously. However, it did give me this one piece of femininity that I could hold on to as I tried to go through each day pretending all was right in my world and that I was this “man among men.” Yeah…didn’t work at all and only made things worse.

As I began my transition, there were nights I secretly prayed I would resemble Mom even more. I still want those traits of Dad that I have…but Mom was so beautiful that I just hope…every night…that I’ll resemble her in a way only a daughter can. Most days though, I look in the mirror and it’s like, “Nope…not even close.”

Now let me say briefly, it is very hard for me to see the changes in my physical appearance because I see myself in the mirror every day. Some say I should do weekly pictures…but I hate that because I would end up picking each week’s picture apart to the point it would drive me crazy.

You know what though…ever now and then, I catch a glimpse of Mom looking back at me.

The other day, I was getting ready for work. My hair is long enough now that I get those lovely tangles every day. So I was in front of the mirror brushing my hair and I looked in the mirror out of the corner of my eye and I saw it…

I saw changes. I saw a difference in my face. I saw Mom looking back at me. I saw someone much more feminine in appearance staring back at me.

I stopped brushing my hair, sat on my bed and just cried. There was a feeling of progress there that I can’t find the words to explain.

On this journey, I have cried a great deal. More than I ever expected to. Most of my tears have been in anger, frustration and fear as we have struggled with my estrogen levels and members of my family have rejected me.

Sometimes though…they are tears of joy and peace.

Sometimes…sometimes…we actually notice the changes when we aren’t looking at old pictures.

I hope I look more and more like you, Mom.

Not only am a transgender female, but I am also in the process of changing careers.  I will be graduating with a Master in Professional Counseling by the end of the year and I plan to specialize in grief, crisis, trauma, gender identity and sexual identity.  I also hope to one day begin presenting on transgender/gender fluid concerns within health care as a means of promoting better health care for others. 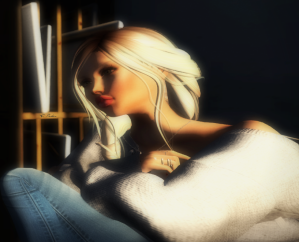